If you don’t have time to read this review of Juniper Systems’ Cedar CT8 Android tablet, I can sum it up for you in just a few words: I LOVE this tablet. If you would like to know why, then read on.

I started using a tablet computer as a field tool in early 2011. Actually, that is not entirely true. I made an attempt to use a Windows ruggedized tablet a couple of years before that, but the test failed as it was too big, too heavy, and too expensive! The introduction of the iPad gave us a tool that addressed most of our needs.

Since 2011, I have had good success with a variety of tablets: iPads, Android Tablets, and Rugged Windows devices. The consumer-grade devices (such as the iPad) have worked because most of my field work has been on Canada’s West Coast. The relatively mild weather means that we don’t often have to deal with temperature extremes, but we do have to deal with significant rain, and sometimes wet snow. Not exactly ideal conditions for a consumer-grade tablet, but I have been able to “make do”.

“Making do” with an iPad means sometimes having to put the tablet under my jacket to keep it warm enough to operate. This can happen at even just a few degrees below freezing – especially if it is windy. High temperatures can also occasionally be an issue, as I have had the tablet shut down because it was too hot. I have run into this when the temperature hits about 30 to 35 °C (86 to 95 °F).

One of the other challenges with a consumer-grade mobile device is battery life – especially in cold weather! Often, it is challenging to get the battery to last for a full day in the field. With the CT8, the battery can be swapped out in less than a minute. Not having to worry about running out of “juice” is terrific! It actually makes me more productive as I can run the display on full brightness, which makes it easier to see in full sunlight.

It is the ruggedization of this mobile device that makes it a really great field tool! The rubber bumpers on the corners and the well-designed battery cover make this a solid choice for adverse environments. Plus, the broad temperature operating range (-20 to +60°C or -4 to +140°F), ensures that most users will not have to come up with work-arounds in cold or hot weather.

The CT8 is an 8” Android tablet with generally mid-range specifications – more than adequate for any task I put it to. I found the tablet boots up quickly and is plenty responsive. I am not going to get into the details regarding the specs, but here is a link to a great article from “Rugged PC Review” that provides this information. It is a thorough and well-written review; I would encourage you to read it.

In one regard, the specifications of this tablet surpass every other tablet I have used in the field – the rear camera is remarkably good. It is a 16 MP Sony camera that can capture good-quality photos and 4K video. I have only seen comparable cameras on high-end phones, but never on a ruggedized tablet. It is well beyond what most field users will need, but great to have.

The display on this tablet is perfectly acceptable for viewing in bright sunlight. It would benefit from an improved anti-reflective coating, but I did not have any difficulty working with it in full sunlight. It appears to have good contrast, which compensates for the relatively low brightness (450 NITS) and less-than-ideal anti-reflective coating. There are certainly better tablets on the market for viewing in sunlight, but they are all much more expensive! For reference, below is a photo of the CT8 and an iPad Air 2. I have found the iPad Air 2 to be the low end of what is workable for sunlight viewability – the CT8 is significantly better. I expect that most field users will find the CT8 tablet to be perfectly fine, as the display will not create issues with getting the job done. 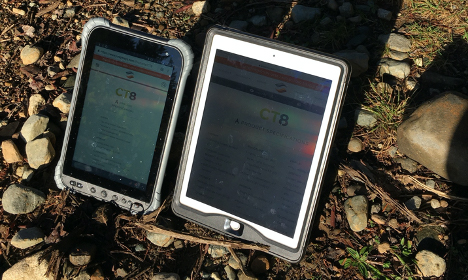 Where this tablet really surpasses every other tablet I have ever used, is in heavy rain. Like other tablets, when the drops of water start running down the screen, the digitizer will occasionally be activated. This can be much more than an inconvenience as it can lead to data entry errors and/or the shutdown of applications.

During testing, I discussed this issue with Juniper Systems and they quickly provided a brilliant solution. By installing a custom Operating System, either the F1 or F2 Keys can be used to toggle the digitizer on and off. This allows the user to keep the display on, without having to worry about the inadvertent activation of the digitizer by water droplets. This functionality does not come standard with the device, but can be added by contacting Juniper Systems. I don’t know of any other tablet computer that can keep the display on, and disable the digitizer! With this functionality, I would take this tablet over any other mobile device – even over much more expensive devices.

One other thing I really like about this tablet, is that it can be used as a phone. I don’t think I would like to hold it up to my ear to use it, but when paired with a Bluetooth headset it makes for a great phone! If this was a business-only device and I had a personal cell phone, I would not hesitate to use it as my business phone. Equipping field staff with this tablet for use as their business phone would significantly reduce equipment costs. Also, because of its size, it is much harder for staff to lose compared to a phone!

I was also able to use Juniper Systems’ Geode GPS with the CT8. Although the CT8 has a built-in GPS, you will get much better accuracy with the Geode. I tested the GPS accuracy of the CT8 on its own and with the Geode by returning to the same location multiple times. In general, in moderately dense forest, I was getting an error of about 6 meters with the CT8 on its own, and 1.5 to 2 meters with the Geode getting an SBAS correction. For much better GPS reliability information than I could ever provide, I would suggest visiting the USDA Forest Service page on which they provide test data on just about every device you can think of. If you want to see how the CT8 and Geode compare to other devices, you will find the USDA data here.

So, the bottom line is, if you are looking for a moderately priced ruggedized Android tablet computer, the CT8 is a winner. For those of us that need to work in the rain, I would take this tablet, with the ability to disable the digitizer, over any other ruggedized tablet – including much more expensive ones. It would be ideal for recording GPS tracks and viewing your location on a map without concern that the rain will interfere with getting the job done!

Thanks to Universal Field Supplies for loaning me the CT8 and Geode for this review. You can find the CT8 and Geode on the UFS website. If you order the CT8 from them, be sure to ask about the custom Operating System that allows the digitizer to be disabled. 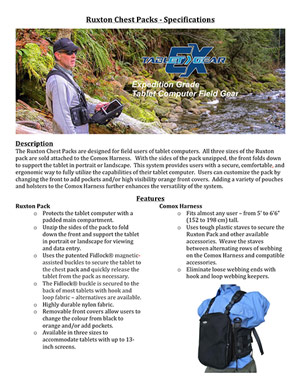